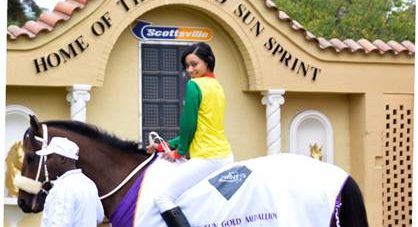 The eagerly awaited Tsogo Sun Sprint Race is once again gracing the Scottsville Racecourse in Pietermaritzburg on Saturday, 4 June 2016 with this year’s theme being Unbridled African Flair.

This world-class race event, which will see celebrities, socialites, sports personalities and the fashion forward descend on the grounds, was first introduced in 1962. Today it is the oldest, biggest and richest sprint event and one of the top six race days on South Africa’s prestigious horse racing events calendar.

Races on the day include four Grade 1 sprint races; the Tsogo Sun Sprint, the Tsogo Sun Gold Medallion, the City of Pietermaritzburg Filly Sprint and the Allan Robertson Championship. The Grade 1 sprint races will feature the most elite horses from all around South Africa and offer 1 200 metres of speed, power and skill. The Tsogo Sun Sprint is an ‘open race’ for both fillies and geldings, while the Tsogo Sun Gold Medallion is for two-year-old geldings and the City of Pietermaritzburg Filly Sprint is for fillies only. The Allan Robertson Championship, named after the founder of the Thoroughbred Breeders Association of South Africa, will put two-year-old fillies to the test.

“This event is for horseracing enthusiasts with a need for speed as four of our Grade 1 races all feature the top sprinters that our country has to offer”, said Tsogo Sun Golden Horse General Manager, Maureen Kivits. “We also look forward to all the fashion and the interpretation that is sure to set the event alight.”

The City of Pietermaritzburg, has partnered with Tsogo Sun since 2014, to position the event and Pietermaritzburg more strongly on the South African map to drive tourism in the area.

This year’s total prize money, which owners, grooms, trainers and jockeys can win on the day, stands at over R3 million, with the main race’s prize money being R1 million.

Under this year’s theme, African Flair, the event, promises glitz, glamour and panache as the order of the day as fashionistas battle it out for both prize and prestige.

Entrance to this not-to-be-missed glittering affair is free of charge so there is no reason not to put on that daring dress or fancy black suit and go turn it up with the rest of the country’s elite.